Spiders are predators and eat a wide variety of nuisance insects, small vertebrates, invertebrates and other spiders. This helps to reduce their numbers. Spiders are not insects but arachnids. They are closely related to mites and ticks. Each spider has eight legs, two body parts and fangs (chelicerae). Pedipalps are also used by spiders to make silk, to line burrows or wrap prey. These strong silk strands are also used by spiders to climb and mark their way to and from the nest.

What kinds of Spiders are there? 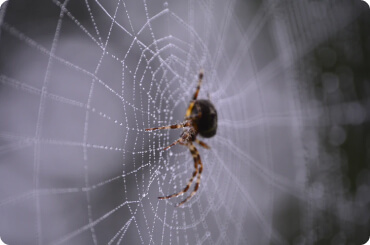 Although they come in many colors, most house spiders are yellowish-brown. Their abdomens are round and have distinctive dark chevron marks on their legs and bodies. They are a common intruder of homes and other buildings. 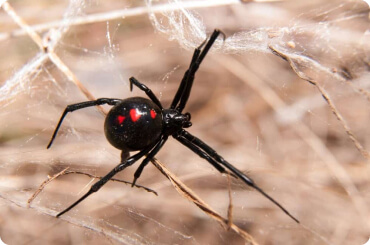 Black Widows have eight long, thin legs and a shiny black body. When extended, their legs measure about 1-1/2 inches. Their abdomens have a red hourglass-shaped mark. They may also have light red or yellow markings on their backs. They have four eyes in two rows. 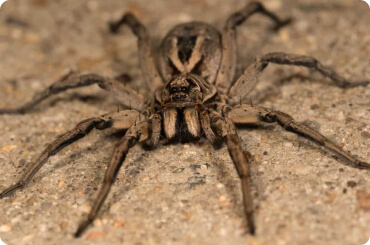 Brown recluse spiders range in color from yellowish-gray or black. They have gray hairs on their abdomens and legs that are darker than their bodies. Their bodies have a unique violin-shaped pattern. Their unique features include their three pairs of eyes, which are arranged in a semicircle.

Some spiders love moisture, so they can be found in crawl spaces, basements and other damp areas of buildings. Some spiders prefer dry, warm places such as attics, subfloor air vents and upper corners of rooms. They prefer dark places.

Thousands of spider species have been discovered around the globe. These arachnids are eight-legged and have two body segments. Three to four pairs of eyes are common for spiders. Although many spiders have poor vision and some species, like the jumping spider, have excellent vision.

They eat insects, spiders, and other prey.

Spiders don't have chewing mouthparts, and instead use digestive enzymes in saliva to digest prey before they eat it. A spider's gut is too small to allow them to eat large food particles. Although most spider species are predators there is one known plant-feeding species.

The egg sac is the mother of spiderlings. The molting process is repeated until spiderlings become adults. Many spider species have males that court females. Male jumping spiders, for example, perform elaborate dances in order to draw the female's attention. Males may be eaten by the female after mating.

Spiders can produce silk that is strong, elastic and adhesive. This silk can be used to create webs, egg sacs, and spider dwellings. Spider webs can vary in size and shape depending on the species. Some webs are funnel-shaped while others are orb-shaped. Others are funnel-shaped. While some spider species prefer to live in burrows over webs, others prefer to be free-ranging and seek refuge in crevices.

Are spiders dangerous?
What is the problem with my spider problem?
Where can I find spiders in my area?
How can I get rid of spiders?
What can I do to prevent spiders from coming back?